A stunning, intimate and unflinching portrait of free soloist climber Alex Honnold, as he prepares to achieve his lifelong dream: climbing the face of the world’s most famous rock … the 3,200-foot El Capitan in Yosemite National Park … without a rope. Celebrated as one of the greatest athletic feats of any kind, Honnold’s climb set the ultimate standard: perfection or death. Succeeding in this challenge places his story in the annals of human achievement.

Alex Honnold Free Solo is an edge-of-your seat thriller and an inspiring portrait of an athlete who challenges both his body and his beliefs on a quest to triumph over the impossible. Revealing the personal toll of excellence. As the climber begins his training, the armor of invincibility he’s built up over decades unexpectedly breaks apart. Honnold begins to fall in love, threatening his focus and giving way to injury and setbacks.

Vasarhelyi and Chin succeed in beautifully capturing deeply human moments with Honnold as well as the death-defying climb with exquisite artistry and masterful, vertigo-inducing camerawork. The result is a triumph of the human spirit that represents what The New York Times calls “a miraculous opportunity for the rest of us to experience the human sublime.”

‘Alex Honnold Free Solo’ will be showing in British Cinemas on the 11th of December with a live Q&A with Alex Honnold. It’s gonna be good!

Here is the article from The New York Times written by Bret L. Stephens an Opinion Columnist –

In 1923, the mountaineer George Mallory gave an interview to The New York Times in which he famously explained why he was determined to summit Mount Everest. “Because it’s there.”. He died in the attempt the following year. Alex Honnold, who last year became the first person to climb Yosemite’s El Capitan alone and without a rope. Seems to have a different explanation for why he climbs. “Because I’m here.”

Honnold, who is 33, doesn’t quite put it in those words, at least not in “Free Solo,” the documentary film about his historic ascent of nearly 3,000 feet of vertical granite. But it’s what transforms the movie from one that’s about a remarkable feat of daring and athleticism into something altogether deeper.

On Tuesday I went to see “Alex Honnold Free Solo” for a second time, after I couldn’t get it out of my head. I still can’t. The film is a drug. It causes your pupils to dilate, your palms to sweat, and your mind to boggle. Even as you know that Honnold is going to make it to the top, you can’t believe what you’re seeing — a young man, millimeters from extinction, transforming the unthinkable into the sublime. “Free Solo” is 97 minutes long and if you could hold your breath the whole time you probably would.

But the thrills of the movie turn out to be incidental to its real purpose, which is less about climbing than it is about climbing than it is about living. Honnold, it turns out, isn’t simply the most accomplished rock climber of our time. He also has a first-rate mind, capable of thinking through both the minute choreography of his moves across the wall as well as the basic questions of his time on earth.

Should long life be a goal of life? What about happiness? If not happiness, what about excellence? If excellence, what (if anything) should we sacrifice in its pursuit? Love? And when does the pursuit of excellence become mere recklessness?
Honnold has plainly given the questions serious thought — appropriately, since by his own count he’s climbed rope-free more than 1,000 times and free soloists have notoriously short lifespans. “Anybody could conceivably die on any given day,” he says philosophically. “Soloing just makes it feel much more immediate and present.”

It is that presence and immediacy that makes free soloing so appealing to Honnold and his peers — not because it brings death so much nearer, but because it makes life so much more vivid and significant. Most of us have been told, at one point or another, to work, study or perform as if our lives depended on it. There just aren’t many activities where it’s literally true.

Free soloing is one of them. Every move counts. Every motion is considered. No decision is inconsequential. There is no cushion, no second chance, no helping hand. The only route to safety is through the relentless disciplining of body, mind, uncertainty, and fear. In a world of B.S. artists — and in a country led by one — Honnold is modeling something else, a kind of radical truthfulness. Either he’s going to get it exactly right, or he’s going to die.

How Honnold gets it exactly right is the real heart of “Free Solo,” and why the movie is worth studying. Honnold is not a thrill seeker. He’s a perfectionist who understands that the achievement of one supreme thing depends on the mastery of a thousand small things. Much of the perfectionism seems to come from his mother, Dierdre Wolownick, a retired French professor for whom, as Honnold puts it, “good enough, isn’t.”

But it’s his mother who also best understands why her son constantly puts his life at risk — and why she doesn’t quarrel with the choice. “When he’s free soloing is when he feels the most alive, the most everything,” she says. “How can you even think about taking that away from somebody?”

I’m not sure there are many parents who would say the same thing. Why can’t Honnold just be a lawyer or doctor or some other ostensibly respectable profession? Why can’t he put life’s normal fulfillments — his relationship with his lovely girlfriend, Sanni McCandless, for starters — ahead of his seemingly lunatic ambition to achieve something of no obvious utility? Isn’t he merely selfish, and doesn’t his fatalism about life make that selfishness worse?

You can’t watch “Free Solo” without wondering about all this. As a father, I doubt I could muster Wolownick’s apparent sang-froid were my kids to take similar risks. Perhaps it’s a function of my own deep selfishness, both emotional and biological, that I want my children to bury me, not the other way around.

On June 3, 2017, Alex Honnold free soloed the Freerider route of El Capitan in three hours and 56 minutes. It wasn’t an act of recklessness but of the kind of planning worthy of a moon landing. And it wasn’t an act of selfishness but an extraordinary gift to everyone who believes that the limit of human achievement is far from being reached. And it wasn’t a useless stunt but a reminder that utility alone is a poor way to measure the grandeur of one man’s spirit.

Go see the movie. You’ll see what I mean. And you will be grateful that Alex Honnold is here. 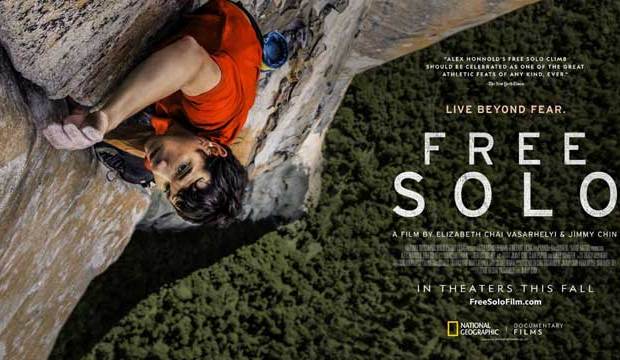 Bret L. Stephens has been an Opinion columnist with The Times since April 2017. He won a Pulitzer Prize for commentary at The Wall Street Journal in 2013 and was previously editor in chief of The Jerusalem Post. @BretStephensNYT – Facebook – See The Full ‘Alex Honnold’ Article Here