The Vegan In Me

Back in my youth, I found the Vegan in me. Nearly 40 years later it’s back!

What happened back then to stop me continuing to be a Vegan? Why have I returned to it in my 50s? Well, it’s simple really, knowledge. Not just my personal knowledge but that now gained by those working in the fields of body and food sciences and of course the information boom.

During the 60s and 70s, we were all living the Hippy dream, saving the Earth, members of CND. Being Vegan was just another one of those Hippy things, it was good to get involved. We were saving some poor soul from being killed for our benefit. However, there was a problem. We had little knowledge of the consequences of eating a Vegan diet and very little available information.

For me, the consequences were that I lost weight, I was only 10.5 Stone, to begin with, and became deficient in some of the important minerals and vitamins. I took the hint and changed back to a standard diet, my girlfriend at the time didn’t and became anorexic.

Although I had turned my back on being a Vegan I had a good reason. This didn’t stop me from regretting the action though! Over the years I had toyed with the idea of becoming Vegan again but was worried about the consequences. I still did what I could to help nature and the World. Even owning and running a Free Range farm with the idea that I was somehow making these animals lives better. I had even checked out the abattoir and been shown around, all looked as humane as it could possibly be. Then one day my daughter and I were parked in the yard awaiting our collection slot when she said, “what is all that green stuff coming out of that pipe”? I asked the manager, “oh it’s the contents of their guts when we split them open”. Man, I had been so dumb!

Back To Being Self

To cut a long story short. Ever since my 20s I have had trouble with controlling my weight, at age 56 it went through the roof. 85kg to 106kg in 4 months! The cause was traced, things put right with drugs and gradually I started to feel better. But I didn’t want to stay on drugs forever. A complete lifestyle change was called for, mindfulness, meditation, yoga and being self again. For me, part of this was to become a Vegan again. To my great relief, I found multitudes of information online and hundreds of suppliers of Vegan products available. Once I had the other lifestyle changes underway I am pleased to say I became Vegan again! 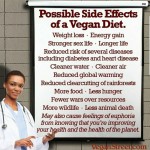 Mindfulness, meditation, yoga and being self all helped to change my life and make it a far happier place to be. But being Vegan had the most significant changes to my general body health –